Mansfield holds some significant positions in Australian legal history. From Mansfield’s important historical position through to interesting modern developments, the small town and its’ small court house have seen its’ share of history. 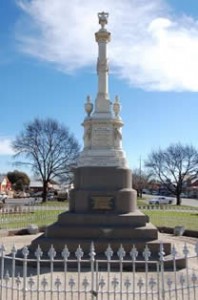 There have been 2 important issues relating to Mansfield and the High Country that Williams Hunt has been involved in recently.

“We count this as a great example of how a law firm can give its support to a community issue. The question was whether a relatively pristine mountain near Mt Buller should be developed for downhill skiing. At the time it was a hugely controversial issue. We were asked if there was a legal remedy to stop the contractors moving in. We found grounds to issue a Supreme Court Injunction which succeeded in stopping it. That meant there was time for a government committee to be established and for a debate to be conducted in a proper forum. An Environmental Effects Study was done and the result was the mountain stayed as it is.”

“I remember telling my Partner that I thought we had a good case – but the problem was we didn’t have the money.     To his endless credit Tony was encouraging and it became our greatest single pro bono consultation that this practice has made. It is good to know that every now and again a firm gets a case of genuine merit with a significant community outcome. It was fun – it makes you feel like a real lawyer again!”

“If I was lost up there I’d want them to be looking for me. They really do know it better than anybody and there is definitely a very strong and very deep spiritual connection there. We were engaged to argue the case to force the government to issue the licences to allow the cattlemen access. We had a genuine and committed client on our hands.” “Of concern for Alpine are the government banned cattle grazing in 2005. This issue together with a whole range of other issues relating to Alpine National Park has not gone away. However, a lot has been written and filmed about the small number of hardy families that have been grazing the high plains for about the last 150 years.”

The Mansfield court house was built in between 1879 to 1880. The architect was G.W. Watson and it was built at a cost of £1906. The court was originally a Court of Mines and it heard matters relating to the Victoria’s Mines Act. The matters related mainly to industrial injuries or arrears of pay. In 1918 Robert Gordon Menzies made his debut as a barrister in Mansfield. It was a mining case concerned with the compulsory purchase provisions of the Mines Act. Menzies won before the Mining Warden in Mansfield but led by Owen Dixon, he ultimately lost before the full Supreme Court. For his trip to Mansfield Menzies received the princely sum, after expenses, of £1 6s 0d. Today a Magistrate sits every Wednesday fortnight to hear local matters. While not many matters are contested the Magistrate sometimes hears a trial, albeit a short one. 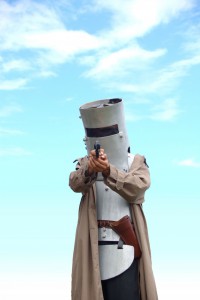 Ned Kelly occupies a unique place in Australian history. In the 125 years after Ned’s death, opinions are still divided as to the true character of Ned. Was he a merciless killer or a man pushed too far? What can be said about Ned Kelly is that still today he is seen by some as a national hero.

For Mansfield the story of Ned Kelly takes a more sobering tone. The shootings at Stringy Bark Creek are remembered in stone at a monument near the town centre and near the creek there stands a tree with a plaque describing the events that took place. The shootings occurred approximately 11kms from what is now the small mountain settlement of Tolmie. Tolmie is about 30km north-east of Mansfield in beautiful but extremely rugged mountain bush land.

The Shootings at Stringy Bark Creek

In October 1878, four police officers Sergeant Kennedy, with Constables Lonigan, Scanlon and McIntyre, rode out from Mansfield in search of the Kelly gang. They were heavily armed and did not wear uniforms. On the 25th they made camp at Stringybark Creek, unaware that only a mile away was the Kelly’s camp. Ned had found the police camp after hearing McIntyre shoot at some parrots. Ned knew that he and Dan would be shot on sight if found by the police. The police had bought with them a pack horse fitted with heavy leather straps. The purpose of these straps was to lash the bodies of Ned and Dan for their return to Mansfield. There were no taking prisoners. 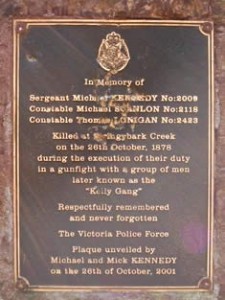 “I was compelled to shoot them, or lie down and let them shoot me it would not be wilful murder if they packed our remains in, shattered into a mass of gore to Mansfield, they would have got great praise and credit as well as promotion but I am reckoned a horrid brute because I had not been cowardly enough to lie down for them under such trying insults to my people certainly their wives and children are to be pitied but they must remember those men came into the bush with the intention of scattering pieces of me and my brother all over the bush…” from the Jerilderie Letter

On the morning of 26 October, Sergeant Kennedy and Constable Scanlon mounted their horses and left to search the surroundings, while Constables McIntyre and Lonigan remained behind. Around noon, the Kelly party tracked their way to the police camp. At approximately 5pm McIntyre and Lonigan were relaxing by the campfire when Ned, Joe, Steve and Dan emerged from the bush and ordered the troopers to bail up.

Being unarmed McIntyre raised his hands immediately. Lonigan however grabbed his gun and went under cover behind the some. McIntyre portrays the murder as cold-blooded while Ned offers a self-defence motive. Which ever account is more accurate will never be known but regardless Ned was tried, found guilty and executed primarily on the strength of his own confession of shooting Lonigan. 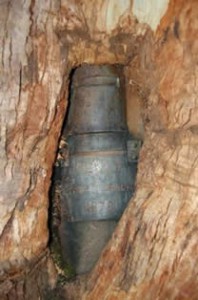 “…without speaking but not wishing to take their lives we waited McIntyre laid the gun against a stump and Lonigan sat on the log I advanced, my brother Dan keepin McIntyre covered which he took to be constable Flood and had he not obeyed my orders, or attempted to reach for the gun or draw his revolver he would have been shot dead but when I called on them to throw up their hands McIntyre obeyed and Lonigan ran some six or seven yards to a battery of logs instead of dropping behind the one he was sitting on, he had just got to the logs and put his head up to take aim when I shot him that instant or he would have shot me… As soon as I shot Lonigan he jumped up and staggered some distance from the logs with his hands raised and then fell he surrendered but too late…” from the Jerilderie Letter

Ned’s bullet killed Lonigan and McIntyre surrendered. Ned demanded that McIntyre call upon Kennedy and Scanlon to surrender when they returned to the camp. Kennedy apparently thought this was a practical joke. Ned then called them to “bail up”. Instead of surrendering the police opened fire and a gunfight ensured. Ned, shot Kennedy while Joe Byrne shot Scanlon.

“Kennedy kept firing from behind the tree, my brother Dan advanced and Kennedy ran. I followed him and he stopped behind another tree and fired again. I shot him in the armpit and he dropped his revolver and ran. I fired again with the gun as he slewed around to surrender. I did not know that he had dropped his revolver, the bullet passed through the right side of his chest and he could not live or I would have let him go…” from the Jerilderie Letter

Ned killed Kennedy with a final shot to the chest in what Ned called an act of kindness. McIntyre managed to escape on Kennedy’s horse and raise the alarm in Mansfield. Back at the creek the gang had covered the bodies of the dead police with blankets, took their weapons and some personal belongings and rode off.

Williams Hunt is a Mansfield and High Country law firm proving that legal expertise doesn’t stop at the gates of the city. Williams Hunt offers a wide range of services in many different practice areas.

For out of hours appointments and will visit you in your home or office upon request.